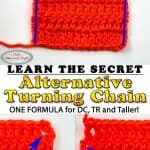 The Alternative Turning Chain using this easy formula will make sure you never see gaps and bulk. Use double crochet, treble crochet and taller stitches. This stacked single crochet tutorial will teach you how to crochet straight edges and have nice transitions in rounds.

A few months ago, when I started crocheting a blanket, I noticed that my sides were bulky. They had some gaps, but were still straight.

When I learned how to crochet, I was taught two different ways to crochet a turning chain. This was always used when crocheting double crochet stitches (or taller ones).

BUT, nobody told me there actually was a way to crochet the turning chain in a different way. Such that there will never be a gap or a bulk on the side. But instead have a straight smooth edge when crocheting anything equal or taller than a double crochet.

I got frustrated and wanted to find a solution to my problem. Around the same time, I started getting messages from my followers saying that they had the same problem as well.

No bulk and straight edges – how it all started

So, I started small. I first found a formula that will help those who just needed to understand how to get straight edges. Whether they are bulky or not, but at least they were straight.

Get 8 Secret Crochet Tips sent to your email inbox

Sign up to receive email newsletters from Nicki's Homemade Crafts to be notified of new free crochet patterns, tutorials and get access to the 8 tips immediately.

Then I figured out how to get those straight edges to be smooth also when crocheting single crochets and half double crochet stitches.

I tried a few different ideas I had in my mind to get to the solution. And then it hit me. I remembered my linked double crochet stitches. I just needed to modify my technique and I would have the solution. BAM! I had it.

And it worked, no matter how tall the stitch is! It worked for double crochet, treble crochet, and even taller ones. I created an alternative turning chain.

Before You Judge Me – Here is what NOT to do! This makes Gaps and Bulk

Let me first show you what I created when I tried the way I was taught. For years, I hated the gaps that crocheting created when making a turning chain of 3 and skipping the first stitch.

So I crocheted the chain of 2 and started with the first stitch and crocheted double crochets. And below you can see how that actually looks like.

Now, if you never liked the bulk, most likely you went with the chain of 3, skipped the first stitch and then started to crochet double crochets.

Yes, the pictures below show exactly how that looks. Those gaps sure are not pretty.

I found the solution to never having gaps or bulk again – ever. You simply crochet the alternative turning chain by stacking single crochet stitches on top of each other. Similar, but not the same way as a linked crochet stitch.

This technique allows you to have straight smooth edges, no matter how tall the stitch is. If you have a taller stitch than the double crochet then just stack my single crochet stitches on top for the turning chain.

Let me show you what I mean with a step by step tutorial. I added a video tutorial below as well.

Have you seen my new store full of bags, mugs, shirts and more all with Yarn and Crochet Memes? Click here for more info!

Now instead of starting the double crochet with the 3rd chain from the hook, you will crochet an alternative turning chain which is also known as the stacked single crochet.

But to make this clearer, I will first explain to you the steps for the part where you would turn and start a new row. It is easier to see and understand it that way. I will get back to the beginning part and how to do it in rounds later.

So, let imagine you are on row 2 and you need to start a turning chain.

Now, pull up a loop and make another single crochet. You now have 2 single crochets stacked on top of each other and they have the same height as a double crochet.

You can now start crocheting double crochets starting from the second chain from the hook. To summarize, crochet two stacked single crochet stitches on top of each other for a double crochet as an alternative turning chain.

If you need to crochet a treble crochet stitch, just repeat the previous step and crochet another single crochet on top of the first two you just created.

Simple formula for each stitch to remember

So, to make this even easier, just think about the formula: Double means two, so you crochet two stacked single crochets as the alternative turning chain.

Now at the end of each row, you will then just go on top of last of the stacked single crochets to crochet your last stitch of the row.

The same is true for rounds. Instead of the starting chains we usually crochet, just crochet the alternative turning chain and you will reduce the amount of diagonal seams you created also.

Now, let’s go back for a moment and talk about the beginning of a row. How would you start, instead of crocheting from the third chain from the hook if it is a double crochet, for example? Well, you simply do the same as we just did.

You could also start with a chainless foundation double crochet row and then crocheting normal rows of double crochets using the alternative turning chain at the beginning of each row.

Are you interested to get an ebook with 20 crochet patterns for hats and beanies with viral tutorials? Click here for more info!

How to Crochet the Alternative Turning Chain – OLDER Video Tutorial

If you love this alternative turning chain crochet aka stacked single crochet tip as much as I do, please use the social media share buttons above or below and share this pattern link with the world and your friends. They and I will thank you! I promise!

You can have the most amazing pattern and yarn in the world, but if you don’t have the knowledge on how to crochet in a way that makes you proud, then all your work is for nothing.

Maybe you have a dream of having perfect straight seams or have less yarn to weave in?

Let me introduce you to THE CROCHET CLUB – AN ALL-ACCESS MEMBERSHIP! It is exactly what it says on the tin. If you sign up for the membership I will teach you different techniques and tips on how to improve your crochet projects!

You will get access to all my patterns in PDF formats and full support from me to guide you through the tricky bits. I will also teach you what YOU want to learn! Join me in THE CROCHET CLUB – AN ALL-ACCESS MEMBERSHIP!

We use cookies to ensure that we give you the best experience on our website. If you continue to use this site we will assume that you are happy with it.OkRead more