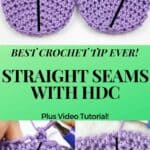 This crochet tutorial will teach you how to crochet a straight seam with half double crochet () in rounds and the reason for having trouble with this stitch in comparison to other stitches.

After I publish the Straight Seam in Rounds Tutorial, I got hundreds of messages all with the same question: Why does my seam slant after I finished the increase using your method? After doing some digging, I noticed, that it was not every stitch that created this problem. It was only the half double crochet () that would not create straight seams, but rather have slanted seams.

So, I started to dig deeper and figure out why that is and what you can do about it. I found 2 methods that will help you get the seam straight with . I will teach you both methods in a photo and video tutorial.

In case you need some more crochet tips and tricks to have a happier and more relaxed time crocheting, please check out these:

The Most Important Part of all: WHY you have No Straight Seams with HDC

So first, let’s take a look at the 4 basic crochet stitches. One of the first things to point out is that the half double crochet is a half stitch whereas the single, double and treble crochet stitch are all full stitches (that’s how I see it).

Because of that and the bulk that gets created when crocheting a the “V’s” (below seen as horizontal lines) are not on top of each other row/round by row/round. That creates a shift and makes the seam slanted when crocheting a in rounds. I demonstrate and explain this a bit more detail in the below video.

Get 8 Secret Crochet Tips sent to your email inbox

Sign up to receive email newsletters from Nicki's Homemade Crafts to be notified of new free crochet patterns, tutorials and get access to the 8 tips immediately.

Why HDC Stitches don’t line up in Rounds

So, here you can see it a bit clearer that the hdc stitches are made in the same shifted over when crocheting “on top” of a stitch from the previous rounds. That creates a shift and you won’t see a straight seam with hdc.

However, to use double crochet as an example, you can clearly see that, as a full stitch, the next stitch “on top” of a dc stitch from a previous round is not shifted over as much and actually gets straightened out when you keep crocheting. The V’s of the stitches (horizontal lines) line up and are parallel from each other which isn’t the case for hdc.

Let’s look at the in when it’s laying flat. Look at the spot where the stitch above the hook is. Now, look at the V (horizontal lines) of that stitch. Do you see that it’s shifted over which creates

Now, let’s do the same test for a double crochet. Do you see where the dc is above the hook? Now, do you see how the V’s of that stitch align parallel to the V’s below that stitch? That is why a full stitches create straighter seams than half double crochet stitches.

So, now that you fundamentally understand how the stitches like and how its structure affects whether a seam is straight or not, I will teach you 2 ways how to get a half double crochet seam straight.

How to Crochet a Straight Seam with HDC in Rounds

The below picture show how a typical hdc seam looks like in rounds when you follow a pattern and it tells you to do a ch of 1 or 2 in the beginning of each round. You crochet your typical increases per round until you need to increase in height but not in stitches. You see that you can’t achieve a straight seam with hdc this way. Now, let’s look how you can trick the system.

2 Methods to Get Straight Seams with HDC in Rounds

1. Method: Decreases, but a bit bulky

Here, you can see that I got a straighter (but still not perfect) seam with . This is the first method. So, I crocheted a dec at the beginning of each round (not the first round of increases) and then compensated for that stitch at the end of the round by crocheting a inc. That makes the stitch count balance out and creates a shift into the other direction.

Sadly, it creates a bit of a bulk. So you need to decide if that’s worth it for you to get a straight seam with . I also used the hidden slip stitch and did not crochet a ch of 1 or 2 to reduce some of the bulk. The 2nd video below shows this method.

You can also, skip the first stitch after a slip stitch and then add the stitch back after you finish a round. I prefer this method as it looks better and is less bulky. The first video below shows you step by step how to do this method for several rounds.

The Break-Through Moment: Get Straight Seam with HDC Video Tutorial

Straight Seam with HDC – Another Method

I hope you love this tutorial as much as I do. If you love this tutorial and technique, please use the social media share buttons above or below and share this pattern link with the world and your friends. That way you will find it easily again when you need it and you also provide the world and your friends with the ability to gain extra crochet knowledge as well. And to top it off, you help me as it allows me to create more content that you love already and want to see more of – free crochet patterns and tutorials. So, thank you for sharing.

Also, I share many more free crochet patterns and tutorials often in my Newsletter. Just for signing up I will send you a free ebook. If you are interested, please sign up below. I’m pretty sure you will enjoy my newsletter and support group on Facebook.

See what Angela, from my crochet group, said: “…Just today alone, I was speaking to a friend and mentioned this group to her because she’s having a hard time emotionally. I told her she needed to join so she can learn some cool crochet techniques and keep herself busy. You’re my first “go-to” group. Not only do you have some amazing ideas… But it’s you as a person that I can relate to. You’re kind, generous, and probably take things to heart more than you should (I do that too lol)… But you’re awesome! …”